What the Green New Deal Means for Washington, DC 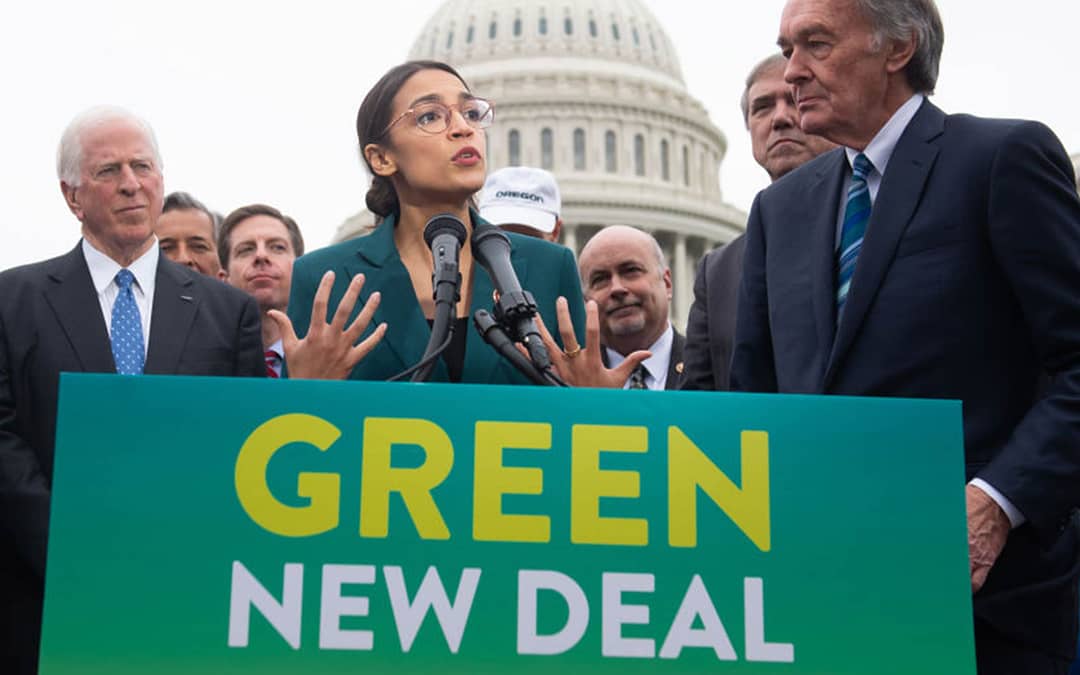 Despite the fact that protecting the environment is central to both domestic and foreign policy agendas of young voters, national leaders have been consistently negligent in enacting thorough policies that address climate change. In the vacuum of national leadership, local policies remain the main movers of greenhouse gas emission reduction. Last December, DC leaders enacted the Clean Energy DC Omnibus Amendment Act of 2018, which makes our city a trailblazer among surrounding states. However, this local policy and enforcement still fall short of the needs outlined by scientists for moving away from fossil fuels, and in order to be successful in uplifting all DC residents, it will require greater attention to detail for better community-desired enforcement.

We have eleven years to prevent irreversible damage from climate change. Over the past eight months, we have seen a great deal of attention paid to the existential threat of climate change and momentum gained to pass a national Green New Deal resolution; how do the goals of the Green New Deal compare with our local policy? And what more do we need at the local level to rise to the challenges posed by climate change?

Goals of the Green New Deal

The Green New Deal is a 14-page resolution that outlines goals for the United States that combat climate change while addressing systemic inequities baked into our economy. In summary, it states that, as a country, we must accomplish the following by 2030:

This resolution sets goals for action but does not result in direct changes in policy; what it would do, if enacted, would be to make enacting policy that goes in the opposite direction easier to rhetorically fight on the floor of the House and Senate. It sets the bar for where we are headed as a country. There are dozens of bills that would fall under the overarching political goal of the Green New Deal, and a passed resolution would give those bills more weight when discussed.

The Green New Deal resolution remains unenacted due to a lack of political will by current conservative leaders at the national level. However, local, state, and federal laws and regulations can still address the above goals to varying extents regardless of whether it’s passed at the national level.

How Does the 2018 Clean Energy Act Measure Up to the Green New Deal’s Ideals?

According to the DC Climate Coalition, the Omnibus bill in DC accomplishes the following:

We set ourselves apart from surrounding states with our updated 100% Renewable Portfolio Standard (RPS). Of surrounding mid-Atlantic states, DC, has the most aggressive RPS (Chart Source: National Conference of State Legislatures: State RPS and Goals). Ideally, DC will be able to meet and achieve this goal ahead of time to be fully in line with the 2030 deadline provided most recently by climate scientists.

While strong goals were set beyond our new RPS relating to economic equity, there are still significant hurdles our city must achieve in order to meet those goals. Unfortunately, early developments in enforcement measures in the setup of our Green Bank have already seen some setbacks.

Provisions establishing the DC Green Bank have great potential to harness the power of renewable energy access to uplift frontline and vulnerable communities. However, concerns have been raised by community members including but not limited to the Chesapeake Climate Action Network, Empower DC, and the DC Consumer Utility Board about the individual members on the nascent DC Green Bank’s Board of Directors. Community members are concerned about three board members in particular – one who oversaw over $30M in faulty loans for affordable housing, another with connections with ethanol lobbies, and a third serving as a “clean finance” expert who has no experience in clean financing (Source: C. Hodgkins, Will DC’s Green Bank be a Tool for Equitable Development or Revolving Door Politics?).  Despite these concerns, all nominees were confirmed and held their first board meeting on July 25, 2019.

Additionally, there are outstanding anxieties about the role utilities played in railroading through the passage of amendments at the last second which pass on costs of efficiency programs to customers.  Utilities successfully lobbied for and provisions removed that would have required DC’s electric utility to buy electricity through power purchase agreements (PPA’s). In fact, Pepco recently filed a multiyear rate case that puts the onus on ratepayers to switch to renewables, which includes an increase to a $21.40 fixed charge from current $14, disproportionately impacting low income consumers.

Before the passage of the DC green omnibus bill, utilities successfully lobbied for the removal of provisions that would have required DC’s electric utility to buy electricity through power purchase agreements (PPA’s). Additionally, there are outstanding anxieties about the role utilities played in railroading last-second amendments that pass on costs of efficiency programs to customers. In fact, Pepco recently filed a multiyear rate case that puts the onus on ratepayers to switch to renewables. This includes an increase to a $21.40 fixed charge from current $14, disproportionately impacting low income consumers.

Looking Ahead and Getting Closer to a Local Green New Deal

One of the central standards of the Green New Deal is that new policies must factor in systemic harm to frontline communities. DC Government’s catering to Pepco’s requests shows that, while we may have good policy on paper, the enforcement and cost burden of our local policies are out of line with the broader ideals of the Green New Deal.

Engagement on the enforcement of policies will still be an uphill battle, as DC organizations like the DC Consumer Utility Board and its affiliates voice concerns of the DC ratepayers and ensure actions are taken. DC deserves fair, transparent, affordable, and progressive reform   of our utility delivery services that more equitably contribute to the end of fossil fuel dependence, rather than passing on burdens to ratepayers.

We do not know what national incentives may be implemented since there is not a large enough majority in Congress or a willing president who would pass sweeping national Green New Deal legislation. The 2020 election provides an opportunity for changing the script when it comes to national policies addressing climate change. One thing we can say with certainty is, when passed, the Green New Deal will do wonders to enhance funding for state and local policy implementation, making our city’s goal of a 100% clean energy future easier to realize.

In the meantime, it is the prerogative of all DC residents and landowners to do our best to help our city implement its clean energy policy and achieve 100% renewable power by 2032. Most roofs in DC still don’t have solar, and we will need every eligible roof to participate in order to meet our aggressively hopeful city goals.

Washington, DC simply does not have enough vacant space to switch to 100% renewables on our own, and sadly our neighbors are not sufficiently deploying renewables. In order to compare renewable energy power production on an even playing field, calculations below show the concentration levelized for production by square mile.