What will DC’s New Clean Energy Bill actually do? 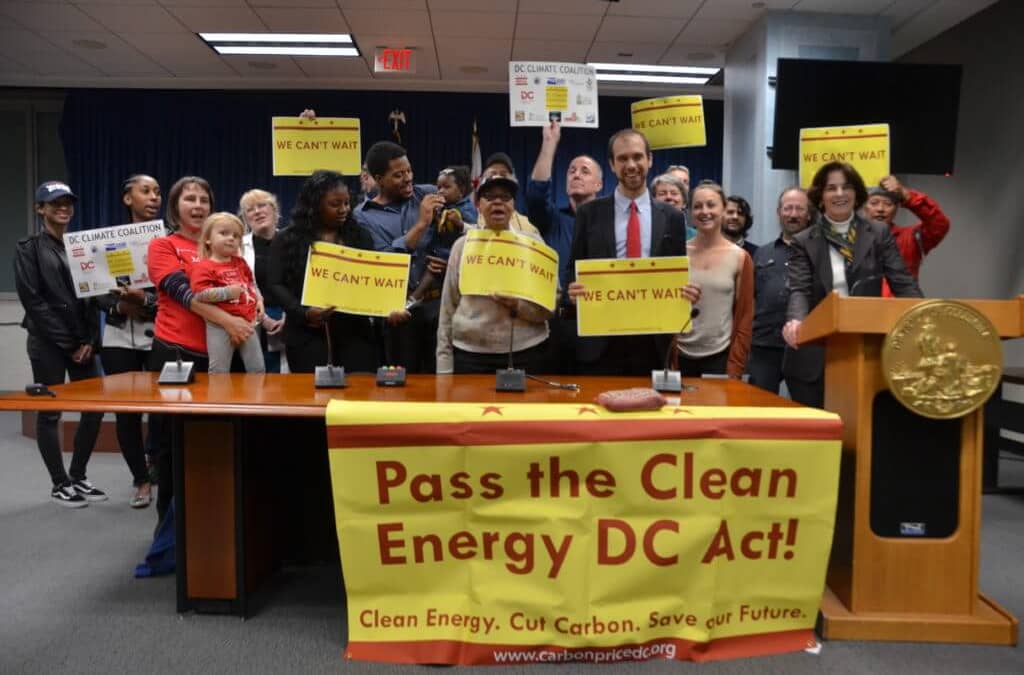 On Tuesday, November 27th 2018, DC City Council voted unanimously to move forward the most ambitious bill to combat climate change in the nation. A second vote to bring the The Clean Energy Omnibus Amendment Act of 2018 into law will occur later in December, per the Council’s standard legislative process. The overall goal of the bill is to cut the District’s carbon emissions by half by 2032 and completely eliminate emissions by the midpoint of the century. Here’s a quick overview of the major provisions of the bill.

Increase funding to the Green Finance Authority, or Green Bank, through increased utility fees. This is estimated to cost households around $3.10 per month total. An average commercial ratepayer who uses 500,000 kWh of electricity and 50,000 therms of gas annually can expect to pay an additional $283 monthly, with fees on electricity declining slightly until they plateau after 2032.

Increase the Renewable Portfolio Standard (RPS). Last augmented in 2016, the RPS represents a goal for the percentage of electricity a jurisdiction consumes from renewable energy sources. If the District fails to hit this goal, energy suppliers will be penalized through the Alternative Compliance Payment (ACP) system. There is a specific quota for DC based solar energy within this goal, often referred to as the “solar carve-out”. The RPS is one of the fundamental drivers of demand for Solar Renewable Energy Credits (SRECs), which is the most important revenue stream for solar investments in DC. The chart directly below contrasts current and proposed RPS; below the same for solar carve outs: 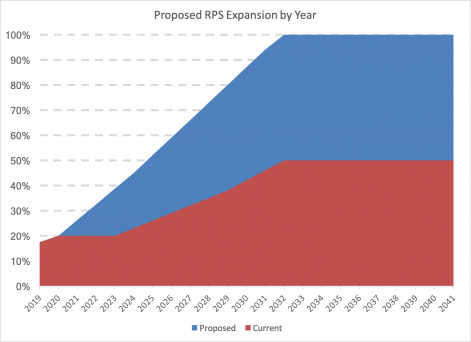 Establish a building energy performance standard program. Building on the benchmarking requirements of the Clean and Affordable Energy Act of 2008, this program mandates building energy performance assessments, which will cycle every 5 years. These cycles will begin for all buildings over 50,000 square feet of floor space in 2021; 25,000 sqft in 2023; and 10,000 sqft in 2026. These assessments will show buildings how to reduce their energy consumption by 20% over 5 years. DOEE will establish exemption criteria for building owners that demonstrate financial distress, renovation, demolition, or sale. DOEE will also establish an ACP for buildings who fail to comply and avail $3mm to assist low income properties’ compliance.

This legislation also mandates that the Mayor establish a Transportation Electrification Program that will require all high occupancy and commercial fleet vehicles to be low or zero emission. Like other aspects of this bill, it will be implemented in phases. The goal is to have 50% of all such vehicles be “zero or low emission” by 2030; 75% by 2035, and 100% by 2045. The main tool for enforcing this program will come in the form of excise taxes on vehicle registrations through the DC Department of Motor Vehicles.

Finally, bowing to lobbying from Exelon, this bill permits PEPCO to recover costs and lost revenue from energy efficiency and demand response programs. FYI, a demand response program incentivizes high volume electric users to avoid using energy during peak usage times (like hot summer days). In other words, ratepayers will be using fewer kWhs and paying more for each kWh. Any fee will be subject to approval of the District Public Service Commission (PSC).

It’s important to underscore that most provisions of The Clean Energy Omnibus Amendment Act of 2018 will be rolled out as an iterative process between the Mayor’s office, Department of Energy and Environment, and other stakeholders. Specific benchmarks, penalties, fees, and such are yet to be explicated. This bill includes money to fund a study to determine more precise compliance and administrative costs to implement the legislative goals.

Feel free to reach out to Honeydew Energy Advisors if you have any questions about this bill.