When Energy Suppliers Go out of Business 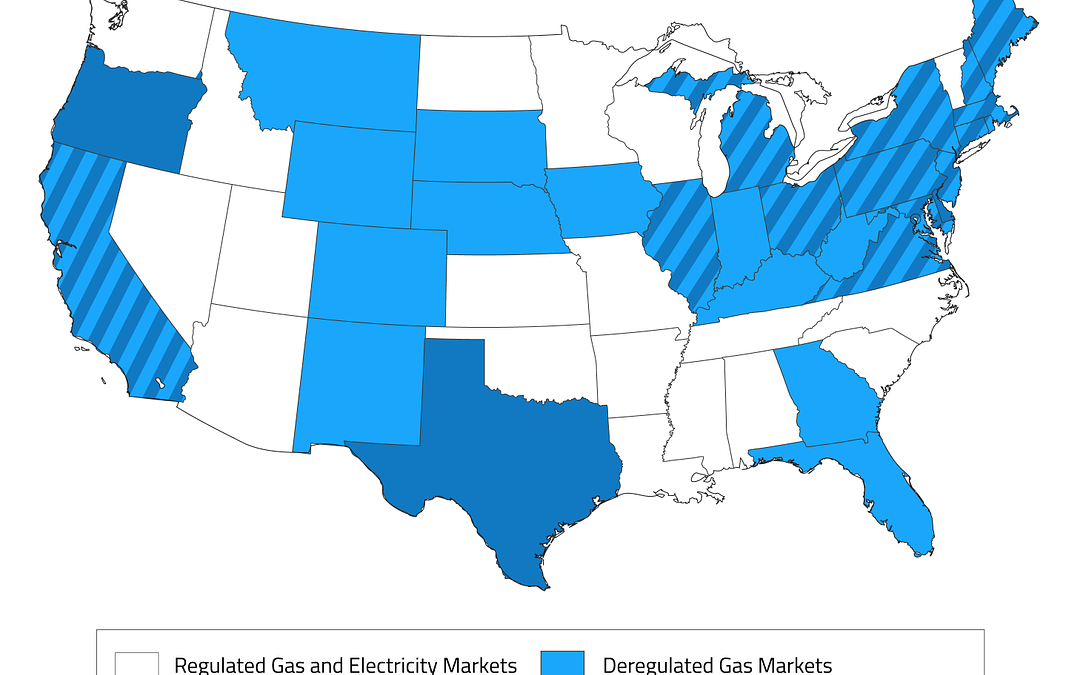 Before we delve into the question begged by the title of this article, let’s take a step back and consider what an “energy supplier” is. Most ratepayer’s utility bill is divided between distribution and supply costs. The utility uses distribution fees to maintain and develop the power grid. Ratepayers generally have no direct influence on their distribution fees.

Supply fees are assessed to generate electricity in power plants that flows through the grid to the end-user.  In deregulated states (see map below), customers can choose which company supplies their electricity or natural gas. If you don’t choose, the utility chooses for you, which is called “Standard Offer Service” or SOS. The SOS rate is variable and typically set quarterly. However, we’ve found that few SOS customers pay attention to this and don’t realize their rates have increased until their bill has already come due.

Secondly, let’s tell you what won’t happen when a third party energy supplier goes bankrupt: your power won’t get cut! Worst case scenario is you will get bumped back to the utility SOS rate.

The utility company is a legal, heavily regulated, natural monopoly. If it becomes financially unstable, the local or federal government will most likely step in to maintain operations- lest it risk an economic catastrophe. However, most energy suppliers are private companies that can freely form and dissolve because… capitalism!

We are currently going through this process with a company that Honeydew has a lot of experience with: Agera Energy. Agera had long had the lowest flat supply rates in the DC and Maryland market. It was also one of the few suppliers to offer “matrix gas pricing”. An energy “price matrix” refers to a set of prices that were guaranteed to end users who used a relatively low amount of kilowatt hours of electricity or therms of gas. If a utility account is above a certain threshold usage, suppliers will require that they “custom price” an account, using a proprietary pricing formula which accounts for factors such as load profile (distribution in which energy is used), location, and seasonality. It would appear that Agera’s aggressively low pricing model was not sufficient to maintain it as a going concern.

Constellation Energy announced it was purchasing all of Agera’s assets as a component of their bankruptcy; a common occurrence in this industry. While laws, regulations, and contracts very depending on jurisdiction and company, the most common occurrence is that the new owner has existing supply agreements assigned to them and must abide to the agreed upon terms. Indeed, this is what we believe will occur in this case, given the robust financial strength of Constellation. However, it is possible that bankruptcy proceeding allow an energy supplier to cancel supply agreements, meaning the end users will have to return to the market and find a new supplier.

If the market has remained stable or prices have declined, re-shopping for rates might not make much of a difference or could actually be advantageous. However, most energy suppliers are not the ones who own power plants. Rather, they purchase energy on the wholesale market from plant operators and resell it on a retail basis. During times of price shock, such as the polar vortex of 2014, suppliers that lacked sufficient diversification, futures contracts, and cash reserves can often go under. Such was the case with Clean Currents. Their customers were locked in at pre-vortex pricing. Then the cold snapped, thermostats started cranking up the heat, reserves dwindled, and the wholesale price of energy skyrocketed well above what their customers had locked into. Clean Currents quickly became insolvent and it’s currents were all forced back to the utility’s Standard Offer Service rate, which at that point was quite high!

So what can you do to protect yourself?

2. Avoid the utility’s Standard Offer Service rate as this is variable and unpredictable

3. Work with a broker who can quickly move you to a new competitive third party supplier