Why Have DC SREC Prices Fallen by 15% in the Past Year?

SRECS, or Solar Renewable Energy Credits, are the most important incentive for DC’s solar market. The revenue generated from their sale is about three times greater than the value of the underlying electricity. Solar PV System owners are awarded SRECs through Pepco for each megawatt hour (1,000,000 kWhs) of energy the system generates over the lifetime of the system, which is typically 25 years. The system owner may then sell those SRECs to fossil fuel based electricity suppliers at a market based price.

Just like any other market, price is determined by supply and demand. The supply of SRECs is determined by the amount of solar energy generated within the District. Demand for SRECs is driven by the ACP, or Alternative Compliance Payment, that is levied on the fossil fuel electric suppliers.The ACP is currently $500/MWh, declining to $400 in 2024.

The ACP is determined by City Council and Public Service Commission through it’s Renewable Energy Portfolio Standard (RPS) legislation. The RPS sets a goal for what percentage of DC’s electricity should come from renewable sources, with a specific carve out for solar energy. Though the percentage of new solar energy generation is growing steadily, DC consistently falls short in meeting its RPS goal. As of March, the District is falling short of its 2018 RPS goal of 94.5 megawatts by around 22 megawatts or 23%. 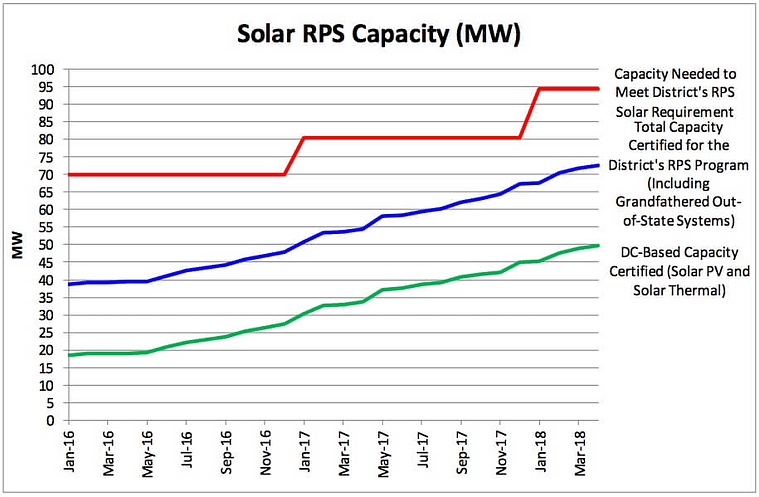 Given this shortfall and the fact the RPS Expansion Amendment Act of 2016 augmented the ACP from 2016 – 2032, it’s counterintuitive to find that the value of SRECs has declined by 15% over the past year, as demand appears to be outpacing supply. See graph above from SRECtrade.

The PSC explains the cause of this price drop in its quarterly RPS report last month. The RPS Amendment Act of 2016 contained a provision that allowed third party suppliers to grandfather in supply contracts entered into prior to 2016. These suppliers can pay a $350 fee instead of purchasing a $380 SREC, hence suppressing demand. Given that these contracts last between 1 and 5 years, we can expect this price lull to gradually phase out by 2023.

Here are some other upcoming policies that are likely to increase the price of DC SRECs in the coming years:

Given that we have yet to be really hit by Trump’s trade war, the ITC remains in place, and the SREC market is likely to remain strong, there has never been a better time to invest in a DC solar energy system.